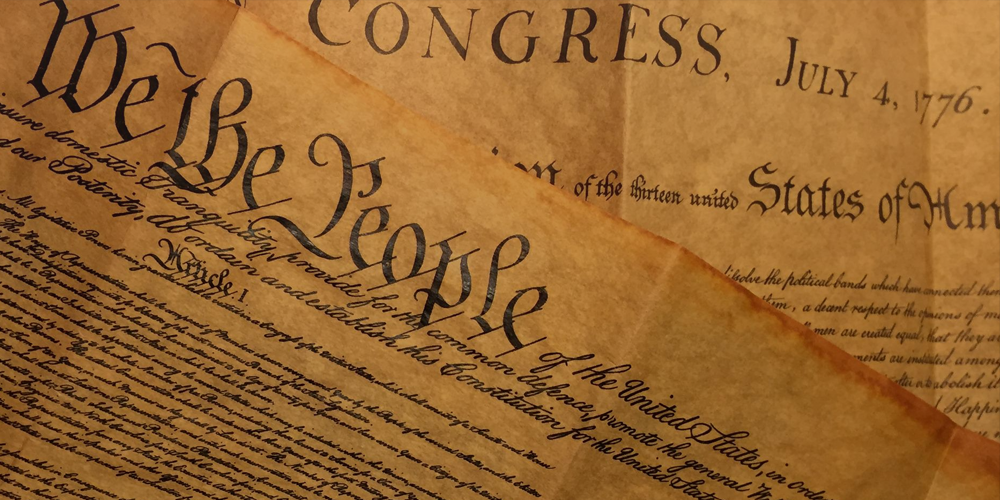 Religious Freedom, as a Weapon

With the continuous rise of Christian Nationalism and our religious freedom actively under attack in this country, I wanted to take some time to talk freedom of religion and why I believe it is one of the most important rights enshrined in the United States Constitution. And why people from all religions and none should take it seriously.

Congress shall make no law respecting an establishment of religion, or prohibiting the free exercise thereof; or abridging the freedom of speech, or of the press; or the right of the people peaceably to assemble, and to petition the government for a redress of grievances.

The founders considered it so important that it was in the Bill of Rights and part of the First Amendment.

Benjamin Franklin when editing the draft of the Declaration of Independence changed the original wording from “We hold these truths to be sacred and undeniable” to “We hold these truths to be self-evident” It could be argued with that one phrase Franklin placed United States on a secular foundation. Is there anything more empowering than having self-evident truths? Our very freedom is founded on that proposition.

Phrases like “Under God” and “In God We Trust” were added to the pledge of allegiance and currency in the 1950s. Over 150 years after the nation’s founding, and largely to emphasize the distinction between the atheistic Soviet Union and the United States.

There are several major Religious Freedom cases before the Supreme Court this session. Obviously, the future of Roe v. Wade which could result in abortion being banned across the country which appears more likely with the leaked draft opinion. And Kennedy v. Bremerton School District where a public high school football coach lost his job after repeatedly praying on the 50-yard line. Students felt pressured to pray with him due to his position of authority.

Christians in particular have taken the line “or prohibiting the free exercise thereof” and are using it to weaponize Religious Freedom into Religious Privilege. They see equality, the expansion of LGBTQ+ rights, consequences for using your position of power to push prayer, and of course a woman having the freedom to decide her own course in life as an infringement on their freedom to exercise religion. And because they do not believe in these things, they want to erase these very freedoms from existence.

The United States is a nation of MANY religions and none. I personally, am an atheist. Religious Freedom an extremely important issue to me. It is at the very core of who we are as a nation, and in my opinion – one of the reasons the United States has been around over 240 years. Throughout my life I’ve watched as largely Christian views were used to treat fellow citizens differently than others. The “definition” of marriage between a man and a woman, sodomy laws, women’s rights, LGBTQ+ rights, and many more I’m surely missing. And now, I am watching the next phase of it take shape as we begin to backslide towards the removal of many of these hard-fought rights.

The reversal of Roe could likely even have consequences for treatments like IVF. But it will have far reaching consequences well beyond abortion. The right to privacy has been used to determine many rights in this country including the right to purchase contraceptives and gay marriage. You need look no further than the Republicans plan, and what they have said out loud about some of the above subjects to see where this goes from here.

The desire to reverse marriage equality, access to contraception and a woman’s right to choose are based entirely on religion. To push the Christian religious worldview on the citizens of the United States. John Cornyn said that the Supreme Court “Mandated Same-Sex Marriage” which couldn’t be further from the truth. Was everyone assigned a same sex partner to marry? The reversal of Roe on the other hand will in fact mandate pregnancy for woman who may not yet be ready to have a child, whose birth control failed, may die if the pregnancy is not terminated, or who were raped. Could you imagine a man ever accepting he wouldn’t have control over his body for nine months?

As Justice Sotomayor asked during oral arguments in the recent case which will overturn Roe “How is your interest anything but a religious view?” Mississippi did not have a good answer to this question – the case should end here.

The very freedom of your fellow citizens is on the ballot this November. A vote for a Republican is a vote to take away the fundamental rights of your fellow citizens. Because they will succeed in this if given further chances to do so. They have been fighting overturn Roe for decades and it absolutely will not stop there.

So in closing I ask my fellow Americans, why can’t we have the same drive and determination to fight FOR the rights of our fellow Citizens as they have to take them away? Get involved in local elections and help to register voters. There are so many things we can do to ensure the rights of our fellow citizens remain. Not sure what to do? Check out Teri Kanefield’s blog post with things to do for a crash course in some actions we all can take.

Vote blue in November, the very freedom of your fellow citizens depends on it.