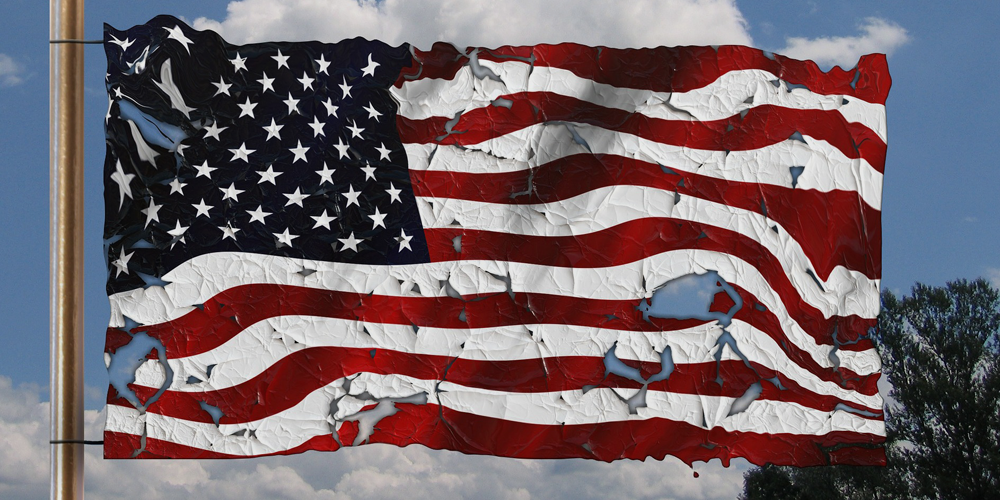 We will inspire patriotism and stop teaching the revisionist history of the radical left; our kids will learn about the wisdom of the US Constitution, the Bill of Rights, and the founding fathers.

They call what is being taught in our public schools “revisionist” history and will use that as an attempt to implement charter schools, where they can teach what they want unencumbered by curriculum standards that govern our public education today. They’re basically doubling down on the book banning that we’ve seen recently and going all in on making sure kids are not taught the actual (often difficult) history of the United States. This is one of many examples of projection in this document.

Government will never again ask American citizens to disclose their race, ethnicity, or skin color on any government forms. We are going to eliminate racial politics in America. No government policy will be based on race. People “will not be judged by the color of their skin but by the content of their character.” We are all made in the image of God; to judge a person on the color of their epidermis is immoral.

They as always, mis use the quote by Martin Luther King Jr. to lay out a plan to “not see color” - they want a white America where they don’t need to deal with the complexities of multiple cultures and races. They won’t ask about race or ethnicity anymore on government forms - in other words, they’ll remove race of any kind from the census allowing them full power to gerrymander without any pesky data points about race getting in their way.

The soft-on-crime days of coddling criminal behavior will end. We will re-fund and respect the police because they, not the criminals, are the good guys. We will enforce our laws, all of them, and increase penalties for theft and violent crime. We will clean up our cities and stop pretending that crime is OK. We have zero-tolerance for “mostly peaceful protests” that attack police officers, loot businesses, and burn down our cities.

They want to fill up our (likely for profit) prisons with more inmates by “enforcing all laws” and “re-funding” the police. The police of course, have not been defunded. And rather unironically say they will have a “zero tolerance” policy for “mostly peaceful” protests. Unless it’s a violent insurrection of their supporters beating police with thin blue line flags I’m sure.

We will protect, defend, and promote the American Family at all costs. The nuclear family is crucial to civilization, it is God’s design for humanity, and it must be protected and celebrated. To say otherwise is to deny science. The fanatical left seeks to devalue and redefine the traditional family, as they undermine parents and attempt to replace them with government programs. We will not allow Socialism to place the needs of the state ahead of the family.

The nuclear family as defined by Wikipedia:

In its most common usage, the term nuclear family refers to a household consisting of a father, a mother and their children all in one household dwelling.

While this term has been expanded over the years to include same sex parents; do you honestly believe that is what they mean? To them the family is man, woman and child as defined by their Christian religion. Straight up Christian Nationalist propaganda as a national party platform. They wish to reverse all progress on LGBTQ equality and roll back the family to the 1950s. Which leads directly into their transphobia and yet more Christian Nationalism:

Men are men, women are women, and unborn babies are babies. We believe in science: Men and women are biologically different, “male and female He created them.” Modern technology has confirmed that abortion takes a human life. Facts are facts, the earth is round, the sun is hot, there are two genders, and abortion stops a beating heart. To say otherwise is to deny science

They wish to push trans gender Americans back to the margins of society so they have to fear who they are. And of course, they wish to regain control of a women’s wombs - they have to re-enforce that “nuclear family” somehow.

We will help low income single women who are considering abortion choose life instead, by paying all costs associated with carrying the child to term and placing the child for adoption.

They even claim they’ll pay all costs for a woman to have a child they don’t want so they can put it up for adoption. Wait, isn’t that socialism?

We will protect the integrity of American Democracy and stop left-wing efforts to rig elections. Today’s Democrat Party is trying to rig elections and pack the courts because they have given up on Democracy. They don’t believe they can win based on their ideas, so they want to game the system and legalize voter fraud to stay in power. In true Orwellian fashion, Democrats refer to their election rigging plans as “voting rights”. We won’t allow the radical left to destroy our democracy by institutionalizing dishonesty and fraud.

Utter shameless projection here - I’ve covered the freedom to vote act here on my blog. Do any of those points sound like rigging elections? If you think so, then you just don’t like WHO is voting. Which president called up the Georgia secretary of state asking him to “find” 11,780 votes? They lost just about every single case where they tried to overturn votes. Which party had forged electors on hand for the certification of the electoral college?

It’s child’s play to poke holes in this one - it’s complete projection on to the Democrats what THEY are actively up to in NUMEROUS states.

And yet more Christian Nationalism:

Americans will be free to welcome God into all aspects of our lives, and we will stop all government efforts to deny our religious freedom and freedom of speech. The Democrat Party and their Big Tech allies are not merely secular; they have virtually created a new religion of wokeness that is increasingly hostile toward people of faith, particularly Christians and Jews. They are determined to drive all mention of God out of public view. We will not be silenced, canceled, or told what words to use by the politically correct crowd.

This one really fires me up. I’m an Atheist, and while I do not believe in a god - I respect the others who wish to practice their faith and religion. That’s enshrined in our Constitution, as it should be. Add to that - I have no clue at all what they are talking about. Nobody is denying their freedom of speech. Nobody. You can’t stop hearing these people talk if you tried.

But here’s the deal, the second you try and use YOUR belief system to impose your religious views on other Americans that is beyond the pale. We’ve seen it time and time again in this country - and they won’t give up on it anytime soon. That’s what they mean by “deny religious freedom” they see their religious freedom as the one religion. Therefore the very existence of - and expansion of rights for gay people, transgender people, and women is an attack on their freedom. They don’t want to be forced to bake cakes, or even admit that gay people exist.

Last but not least, Americans for some reason believe that the economy is in peril despite it growing at its fastest pace in decades. So what do Republicans plan to do about that?

We will grow America’s economy, starve Washington’s economy, and stop Socialism. Socialism is un-American and always leads to poverty and oppression. We will stop it. We will shrink the federal government, reduce the government work force by 25% in 5 years, sell government buildings and assets, and get rid of the old, slow, closed, top-down, government-run-everything system we have today.

It should probably come as no surprise that their only plan is to fight socialism (whatever that means, we do not have socialism), and cut government budgets. To tell every American to pull themselves up by their bootstraps, and to privatize literally everything.

Also, to completely destroy our economy with this gem:

Look, their plan is the same plan of every Republican in recent memory. They believe cutting government budgets and programs, and privatizing basically everything it does will reduce inflation and make our economy better.

The cherry on top is raising making sure “Everyone” pays tax. They aren’t talking about the rich here of course, they already made sure of that when Trump was president. The nonpartisan Tax Policy Center finds that this plan could “Could Raise Taxes By $100 Billion in 2022, Mostly On Low- And Moderate-Income Households”

The fact is - Democratic leadership is better for the United States Economy. And Republicans have no plan, other than to cut everything and raise taxes.

Look, I’ve never been more concerned about the future of the United States as I have been the past few years. This manifesto is largely an attack on the very constitution they claim to hold so dear. It goes all in on elimination of federal agencies, and they’d like for all federal legislation to be renewed every 5 years. So they can of course get rid of the affordable care act, social security and who knows what else.

Pretty much everything in this plan is unpopular with the vast majority of Americans. Whether it be the complete waste of money border wall named after Trump, or the white washing of our public education - the Democrats MUST capitalize on these points and show the stark comparison between the parties and what will happen if Republicans take over.

Mitch McConnell wanted us to wait and see well, now Rick Scott has told us some of what you will get if you put Republicans in charge.

Can you imagine what they haven’t written down?